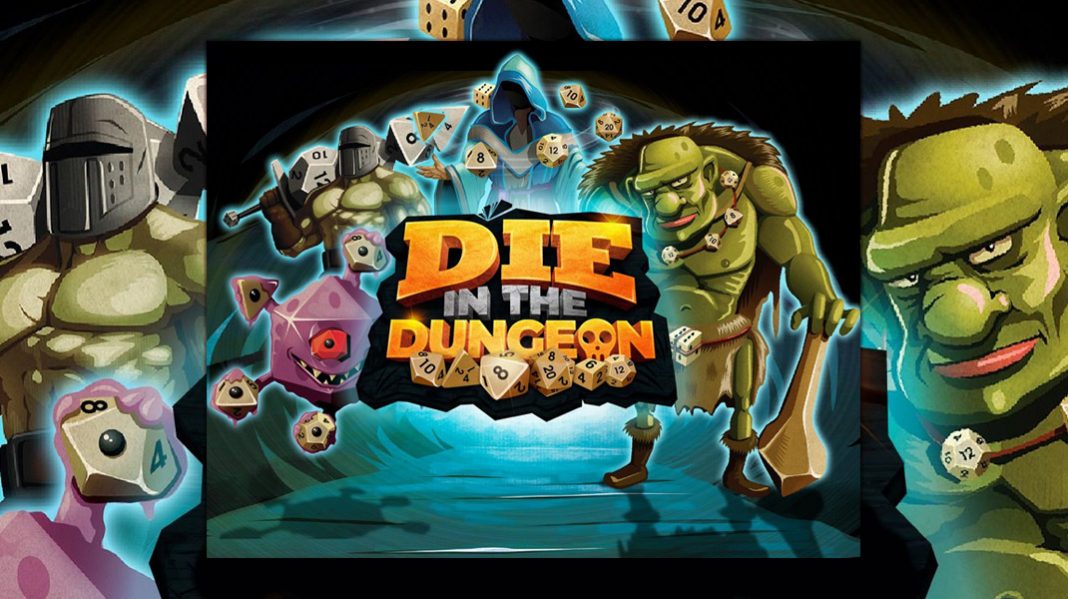 You’ve got it made, living the life of a powerful, fantasy creature. All the fairies you can eat and games every Tuesday with your goblin buddies. Without notice you are magically swept away to a far-off, dark, dingy dungeon by someone who calls themself the DieMaster. On top of that, this dungeon is filled with a collection of lowly creatures and annoying adventurers. Your task is simple: eradicate the heroes looking for fame and fortune at the DieMaster’s expense… or DIE trying!

Flipping the script on the classic dungeon crawler, DIE in the Dungeon puts you in the shoes of one of the powerful creatures lurking in a labyrinth of underground chambers. In this solo gaming experience, you’ll use a selection of unique die rolls, manage your character’s attributes, achieve bonuses and overcome the endless horde of heroes, often working together to achieve their own adventures and rid the dungeon of all inhabitants… including you.

In DIE in the Dungeon, you take on the role of 1 of 5 unique creatures all equipped with their own skills and bonus actions. From there you’ll choose one of the game’s pre-built dungeon maps (or create your own) and begin your adventure.

Players have the opportunity to define the value of their 4 starting attributes that include: Might, Agility, Magic and Health by placing 1 of 4 available dice (d4, d6, d10 or d12) on the attribute of their choosing. This die will define the starting value for that attribute and determine the die-type rolled when using that specific skill throughout the game. These dice can be upgraded during play, but give you something to work with. Taking damage during battles will decrease these values and bring you ever closer to death!

Each dungeon map is made up of a series of tiles, each presenting a unique challenge or encounter when activated as you wander through the cavern. Initially, each tile is face down, thematically mimicking the mystery of uncovering an unknown chamber as you shuffle forward through the chambers. Additionally, you’ll be given a certain goal to achieve with each map. This might be activating certain tiles or gathering specific elements… while ultimately defeating a boss of some type or challenging party of heroes.

Like any good dungeon, there is a spattering of power-ups, bonuses and relics to increase your skill levels and give you strength against, sometimes, insurmountable odds.

As you patrol the area, you’ll tackle a series of “standard” heroes. And just as heroes do, they’ll likely be in groups that make them a stronger force to contend with. Each hero (Fighter, Rogue, Wizard and Cleric) has their own strength, while multiple heroes of the same type create added struggles for you. When approaching a battle, you’ll need to withstand the attack from the heroes first before you can get your own licks in. Each hero attacks with a certain skill, but that skill is the sum of all the group’s stats in that skill set. For example: the Fighter attacks with Might. During his attack, you’ll take the sum of all the hero’s might in the group and roll the die with the maximum die-face to accommodate that skill number. The Wizard’s strength is Magic, but he still carries a bit of Might. If the sum of their Might is 16, the Fighter rolls a d20 dice. In turn, if the die roll exceeds your own Might, you’ll be forced to choose between lowering your Might strength or your Health. When each hero rolls their attack, you will then choose the skill you want to attack with, hopefully exceeding the combined heroes skill in that area and successfully eliminating a single hero from the battle. The battle continues, taking turns with the heroes until all the heroes have been defeated.

Defeating heroes provides you with Die-Namic dice that, when maturated, provide you additional tools to manipulate die rolls. Speaking of manipulating die rolls, each creature comes equipped with a series of bonus actions that can be triggered when you gain a certain number of ability points. Ability points are primarily achieved when you venture into an unexplored room of the dungeon.

DIE in the Dungeon also features it’s own little timer mechanic. As you venture into a new room and take on new challenges, your Time die (a d20) loses 1 value. If you haven’t achieved your dungeon objective (and you’re still alive) when the d20 die hits 0, you lose anyways.

Like any solo adventure, DIE in the Dungeon can be played with a group, but I believe it’s best experienced solo. Playing by your lonesome will allow you to make quicker decisions and contribute to a more favorable flow of the game. There is a dungeon scenario for 2 players that essentially serves as a race to achieve your goals first, but the majority of maps cater to a single player mode.

DIE in the Dungeon is primarily made up of decks of cards, dungeon tiles and dice. Overall, the components are pretty good, but the creature characters really stand out. While they’re not 3-D miniatures you’ll likely see in more extravagant dungeon crawlers, they are uniquely encased in acrylic standees that look and feel pretty cool. The game also used acrylic tokens for in-dungeon bonuses that look and feel great as well. Of course, there are plenty of dice – all shapes, sizes and colors. The creature player boards are dual-layered – which I thought was a nice touch – providing spaces to place your dice. The dungeon tiles are nicely laminated, giving them a unique tactile feel that harmonizes with the acrylic pieces. The cards overall are acceptable quality and serve their purpose.

The game provides a clear and extensive rulebook as well as a separate Dungeon Guide that features all the dungeon map options.

The artwork is a bit silly and playful, which is really in-line with the theme of the entire game. Each character has dice integrated into their character’s illustration driving home the “die” theme. The tile artwork is pretty standard and does its job. The game’s iconography is unique and again, contributes to the theme of the game.  Overall, the game’s artwork does a fine job of elevating the theme and engaging the player.

With the 5 unique creatures and 14 unique dungeon missions, DIE in the Dungeon can certainly keep you engaged. In addition, the dungeon guide provides guidance for creating your own unique dungeon adventure. The place it could struggle is if it becomes a bit “same-y” after a while. While there are a number of unique tile encounters, there are only so many tiles and battling endless heroes could get old. But, For those fully invested, there is plenty of replayability in the box.

DIE in the Dungeon incorporates some pretty standard RPG/Dungeon Crawler tactics, but it does do a number of things well. The light-hearted theme and gameplay make this a perfect introduction to dungeon crawling. I could definitely see a parent partnering on a journey with a young dice-rolling adventurer. The choices throughout each game are fairly simple and straightforward making this a much more highly accessible entry into the genre.

As I mentioned, the decisions are pretty obvious. Players will typically want to use their strongest attribute in almost any battle with a hero. The game does provide a number of bonuses that I often felt were a little overpowered and unnecessary, but I also didn’t advance into the more challenging dungeon scenarios. There were a number of situations where the heroes didn’t stand a chance with their available abilities and it just became an exercise in dice rolling to the inevitable conclusion. This wasn’t terrible often, but it did happen… typically after I had worn down their fellowship.

Setup on the more expansive dungeon maps could be a bit of a pain, but the limited tile shapes made this a lot easier than I thought it would be. Placing the bonuses on the tiles wasn’t a breeze, but again, wasn’t nearly as painful as it looked like it was going to be. Overall, the setup could have been a deterrent, but didn’t really bother me.

While each creature character has its own set of skills, I never felt like they truly distinguished themselves from one another. And since this is a luck-based game, I often felt one ability bonus was just as good as the next. The abilities were fun on occasion and helped contribute to victory.

That all being said, I don’t play that many dungeon crawlers and I think, because of that, I was pleasantly surprised by my experience. I typically shy away from luck-based games in general, but I had a good time cycling through the different types of dice and figuring out how to defeat my latest batch of heroes. The decisions didn’t bog my experience down and I had fun succeeding in the lower-level dungeons. Additionally, I enjoyed the silly, dice-focused theme and colorful artwork.

At the end of the day, the first question you need to ask is: Are you into dungeon crawlers? They have a unique flow in the board game world and they’re not for everyone. If you haven’t played too many, but the idea seems interesting, this could be a good gateway into the genre. It’s light-hearted, not too complex and plays fairly quickly. That being said, more hardened, dungeon crawling enthusiasts might be turned off by the limited tactics, character manipulation and lighter tone. I did enjoy my plays of DIE in the Dungeon and appreciate the creativity and spot this sits in the dungeon crawling world. Ultimately, I would hesitantly recommend this to the right audience.