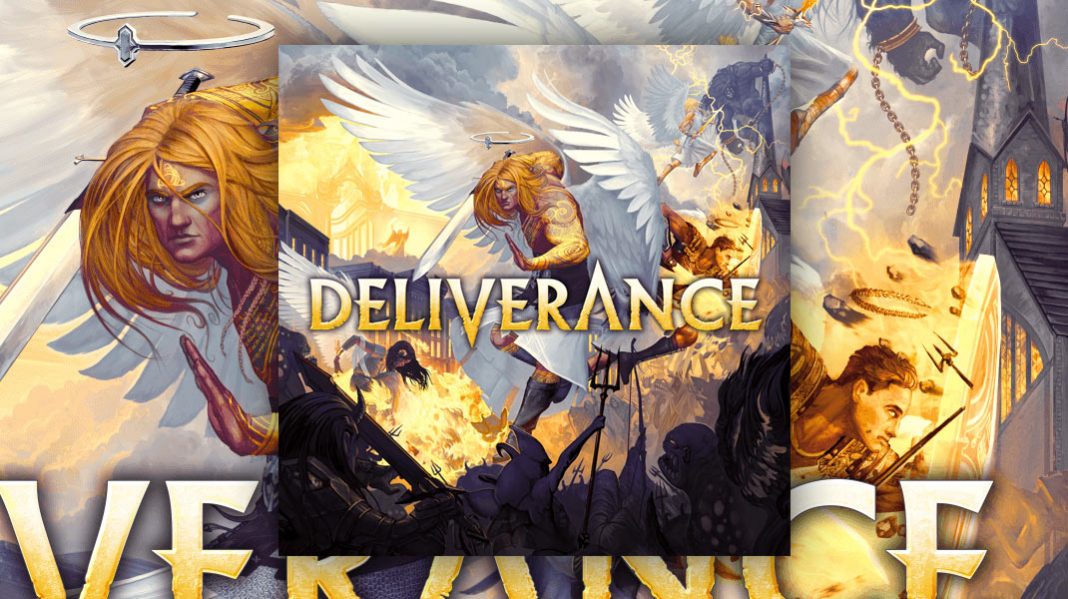 In the invisible realm, supernatural forces wage a battle for the human saints. Across countless countries and throughout time, the engagement will continue until that fateful and glorious day when Jesus returns to put the struggle to rest. For now, the struggle is real and tonight it takes place in the sleepy town of Fallbrook. Taking on the role of angels sent to stand guard, you’ll work together in this cooperative game to fend off Satan’s demons hellbent on deception and destruction. It won’t be easy as you’ll face hordes of unrelenting dark spirits, but there is still plenty of hope. Equip your angel with powerful resources and take advantage of unique skill sets. Build your defense both strategically and tactfully, working together to find the demon’s weaknesses and destroy them in  the name of truth. The odds are stacked against you and the night will get much darker before the dawn… do you have what it takes to defend the saints and overcome evil in the game of Deliverance?

Deliverance is a cooperative, faith-based dungeon crawler pitting a team of God’s angels against the worst Satan has to offer. You’ll level up your angel with tools and special abilities as you work to fend off the demons. Your ability to protect the earthly saints will play a pivotal role in your success and failure. It won’t be easy as the demon force will grow and become more challenging as the game continues. Combine sound strategy, a tactful approach and a bit of luck to defeat the demons and save the town.

Setup begins by randomly placing the game tiles together to form the game board. These double-sided, gridded tiles will randomly be placed forming a unique setup and providing a slightly different tactical approach to each game.

Players will choose an angel, each with a set of unique abilities providing you different strategic benefits.

A series of random card selections will help you set up the board with a variety of demon enemies and saint tokens.

In addition, Deliverance provides a number of difficulty levels to choose from – primarily empowering villains for a deeper challenge.

Playing a round in the game is customized to the number of players. This begins on the Darkness track where the demons gain advantages and grow stronger the longer they exist on the battlefield. Saint tokens placed on the board represent the human saints and they have 2 sides – oppressed and protected. These states are determined whether they are controlled (area-wise) by the angels or demons. Oppressed saints provide additional benefits to the demons on the Darkness track. For example, the team of angels might receive additional damage based on the number of darkness cards in play.

From there, players/angels take turns taking up to 2 actions each. These actions might include movement, a variety of attack options, healing or prayer. Movement will obviously traverse the board, but each angel’s various abilities benefit from the different types and amount of resources gained by drawing talent and prayer cards. Each angel card is asymmetrical, giving them their own unique strategic approach.

To attack, players will need to consider strength and range when engaging in combat. The board also features “walls” that serve to defend and deflect attacks for both sides.

After the player turns, each demon will get to produce their own actions. These actions are resolved by rolling a 6-sided dice. Each demon features their own unique ways to cause trouble for our heroes as they move around the board and attack.

The board pieces are made of grids defining movement and distance. These all come into play when forming a sound tactical approach.

During the game, players will gain experience points based on their accomplishments. Protecting a saint or defeating an enemy are two ways to achieve these. If the combined experience points of the entire team exceeds 1 + the number of angels at the end of turn, each player is allowed to draw Talent or Heavenly Treasure cards. Talent cards allow angels additional actions while Heavenly Treasure cards provide players with additional health, strength, etc.

These game phases repeat until all of the demons or angels are completely eliminated. It would be good to mention that an angel whose health is exhausted ends up back in Heaven (where they initially start). Angels can actually participate in a limited fashion from Heaven or be revived to re engage on the battlefield.

If the angels are fortunate enough to defeat the first series of demons, they will then participate in the Final Battle. During the Final Battle, angels will face additional demons and a Prince. Each Prince serves as the boss, harder to kill and much stronger than any of the more causal villains. The more powerful enemies carry unique effects such as curses, rooting which reduces movement, wither and shadow which all essentially deal damage in different ways.

Players continue to battle, working to defeat the Prince and demons to gain victory.

The version of the game I was sent was a prototype, but it felt very complete. The board pieces, angel and demon boards are all great quality. The various card decks all felt high quality as well as the individual characters on the board. The Kickstarter campaign will feature a deluxe option with detailed 28-32mm character miniatures. All the additional marker and token pieces felt like components in a high quality production. While this was just the prototype, I didn’t have any issues with the production at all.

The artwork for Deliverance is top notch. There is tons of detail and everything is thematically and creatively presented. The angels all feel very angelic (which I guess would be the goal). They’re all very unique and powerful in their own way – very dramatic. The villains have a ton of personality – what you would expect from a big-budget fantasy game. The design on each character card fits their faction and is highly detailed and carefully crafted. Each card set is well thought out, organized and presented. Each item in the game has solid illustrations really enhancing the gameplay and proving a lot of effort went into development. Finally, the game boards are really great. The details of Fallbrook as a sleepy town come to life with dinners and houses providing a great environment for play. You will not be disappointed with the artwork.

I was initially attracted to Deliverance by the idea of a challenging, Biblical dungeon crawler that both clings equally to theology, mechanics and production. I’ve played entertaining and engaging Biblically-themed games that seem to always drop the ball in one way or another. Where would Deliverance sit in the spectrum of faith-based games?

I was pleasantly surprised by the smooth mechanics. The game’s Darkness track creates instant tension, forcing you to plan your movements with efficiency. Anything less will lead to compounding problems for the entire group going forward. The character actions require careful thought and all benefit in different ways.

In addition, leveling up your character always presents a number of interesting decisions. Choosing between the Heavenly Treasures and Talent cards after a successful turn wasn’t always clear cut. My initial idea was to go heavy on the Talent cards and backfill those needs with Heavenly Treasures, but it didn’t quite work out for me. I regretted not approaching these in a more balanced way.

The cooperative nature is in full force here. Sharing the damage among all the players as well as taking actions to strategically benefit others seems critical to success. While you’re responsible for your own actions, interaction among the players is rich and necessary.

I think most players will appreciate the game’s adjustable difficulty. While you can “level up” the game’s difficulty from the get-go, the demons provide their own unique challenges. Some of the demons were just plain hard. Oftentimes you had to defeat multiple demons of the same type and letting them linger only allowed them free rein to cause harm to the human saints and injury to the players. Defeating a Prince can initially seem IMPOSSIBLE – which makes victory that much more sweet.

The idea of the human saints being caught in the middle of the spiritual war was a great thematic touch. Their own spiritual state plays critically on the damage the angels face each round. We often caught ourselves in a traffic jam doing battle and the saint tokens were key to forcing us to utilize the entire board. This really helped employ the tactical element in the gameplay.

Knowing the game play is smooth and enjoyable was the first building block… How about the production?

Andrew Lowen, the game’s designer, brought in artist Dan Maynard who has a fantastic eye for bringing to life epic, fantasy ideas. His dynamic touch guaranteed at the very least, the game would look mesmerizing and immersive. The card instructions are clearly presented and written and the artwork throughout never allows you a single moment to disengage from the world the game has built.

Finally, coming to the cherry on top: The deeply engaged Biblical theme was central to my enjoyment of the game. It’s not just pasted on beautiful, yet empty renditions of angelic beings and mindless, violent demons. The theme is comprehensively weaved into all the concepts and text through the entire game from characters to actions and concepts to directions.

While there are some wholly original characters, the majority are figures creatively brought to life straight from the Biblical text.

Gabriel, God’s courier, tasked with delivering the message of the Christ’s birth to a virgin named Mary, is able to move around the board with greater speed. He excels in his support of the other angels, delivering essential cards and damage around the board. Michael, the Archangel, is a more powerful fighter, strong in health and equipped for heavy battle. The game’s creator spent time sharing each character’s backstory and Biblical connection – emphasizing their strengths and best strategic uses.

The Biblical theme extends throughout the game’s supporting decks. The Heavenly Treasure deck equips the angels with weapons and armor to provide them more punch throughout the adventure. These all feature creative tie-ins such as Saul’s Armor, Branch of David, Samson’s Bracer and the Book of Life.

Thematic games are often only as strong as the villains and Deliverance does a great job creatively crafting each Demon with an imaginative Biblical tie-in. The Fallen Seraph, Unclean Spirit and Abomination all relate directly to the scriptures. The Darkness cards tied to the Demon characters all feature spiritual attacks such as Seeds of Doubt, Hopelessness, Crippling Anxiety and Secret Indulgence.

Overall, the theme of the game really takes it over the top helping to create a unique dungeon crawling experience. I felt everything carefully considered it’s source material and didn’t cut any corners to integrate these ideals into every aspect of the game.

Dungeon crawlers serve their own niche in the board game world. Often you’ll either enjoy them or you won’t. It is a less casual experience and one that benefits the most when each player truly buys in. There are a number of good dungeon crawlers out there, but none (that I’m aware of) are driven by an engaging, Biblical theology. I was really pleased with the quality mechanics and artwork – creating a challenging and fun experience. Gamers searching for that evasive Bible-themed, deep board gaming experience may have just found their match. Deliverance delivers not just in aesthetics, but strategy, mechanics and theme. The care and detail put into nearly every aspect of the game creates a fun, immersive experience dungeon crawler fans are going to eat up.