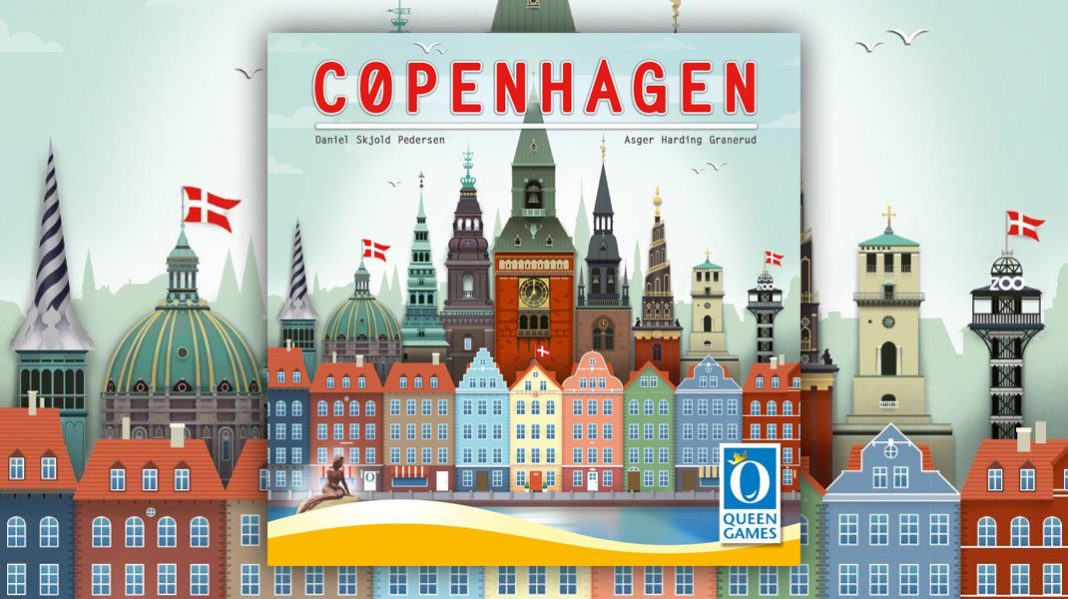 Nyhaven (New Haven), Copenhagen plays host to one of the most picturesque locations in Denmark. On this 17th century harbor front sits a series of brightly colored townhomes, restaurants and bars. In Copenhagen the game, players will be tasked with constructing these beautiful facades with a number of colorful pieces.

In this family-friendly, set collection game, each player is responsible for a single harbor building’s facade. Players will take turns drafting cards in an effort to build sets that they can in-turn trade in for uniquely shaped polynomial tiles that will dress up the exterior. Careful planning and a bit of luck will be necessary to efficiently build the facade in a way that earns you the most victory points.

Copenhagen boasts a bright and friendly presentation, fully confident and ultimately daring the most cynical and stand-offish players not to join in at the table. Primarily, a light-hearted game of set collection and tile placement, Copenhagen doesn’t boast an unnecessary assortment of mechanics or tricks – rather it delights in its simplicity, style and charm. While none of this is untrue, there does lie an interesting puzzle sitting beneath the surface that can be at the same time casual, challenging and engaging.

Throughout the game, players will take turns drawing colored cards from a series of area docks. Certain restrictions are placed on each player as they’re required to draw two cards side-by-side. As the players collect these cards, they build sets that can eventually be exchanged for like-colored, polynomial-shaped tiles. These tiles will eventually make up the facade of your harbor-side building on your personal house board.

On a turn players will have the opportunity to not only draw cards, but instead, they may decide to purchase tile shapes.

The game’s polynomial, tile shapes are made up of a set of squares (similar to games like Tetris). Players might grab a shape with 2, 3, 4 or 5 cubes. To purchase these tiles, players must exchange the same number of like-colored cards as the cubes in the tile they’re seeking. Once earned, that tile is placed next to an existing tile on the facade of your building.

In addition to these 2 standard turn options, players will also have the opportunity to earn bonuses. Scattered throughout the house board are coat of arms icons. These icons can either be triggered by covering one up on the facade or completing certain rows that earn you an additional coat of arms. Players then have the opportunity to either select an ability tile or choose a single-square tile that they may place on their board.

Ability tiles are essential “rule breakers”. An ability tile may allow a player to both draw and purchase a tile on the same turn, pay one less card to obtain a tile or a variety of other benefits. After using an ability tile, that tile is considered “exhausted”, but players may choose, when activating a coat of arms, to instead refresh their current slate of ability tiles.

Play continues until one player scores 12 points or the end of the game card is revealed.

Overall, the components are a fine batch. The various game boards are sturdy and high-quality and should last for a long time. The deck of color cards are pretty good – they’re nothing to write home about, but they’re ok. The ability and facade tiles are as equally impressive as the game boards.

The only glaring issue I have with the components doesn’t necessarily affect the game play. In Copenhagen, Denmark, sits the statue of the Little Mermaid. This features the famous character sitting on a rock above the water. The game attempts to emulate this statue by creating miniature, wooden mermaid meeples designed to look like the statue. Unfortunately, they don’t really look much like anything. In addition, their odd shape doesn’t really sit level on the playing board often falling over. Again, nothing that kills the gameplay – just something that wasn’t on par with the rest of the quality components.

Overall the artwork does a fine job of bringing the game to life. The box art has a fun, timeless appeal presenting the harbor facade immersed in the quirky architecture of Copenhagen. It works masterfully at setting the stage and theme of this game. The art direction throughout is bright and easy going. The artwork and iconography are clear and easy to follow. While the game isn’t language-dependent outside of the instructions, there are plenty of visual cues to get you where you need to be. I might have liked the mermaid scoring markers to better harmonize with the theme’s strong color palette, but I’m getting nit-picky.

Copenhagen does a fair job of adjusting the components and turns for different player counts. There seemed to be a bit more of a run on larger facade tiles in a 4 player game, but that may have just been the group’s paranoia as opposed to any major difference in the game play. Overall, the game still seemed very similar at 2, 3 and 4 players. This is the type of game that you’ll want to play 2-player as well as in a small group and it’s good to know it feels very much the same game.

I won’t beat around the bush, Copenhagen felt very similar to another game that requires colorful sets of cards and that’s Ticket to Ride. That’s certainly not a bad thing. My family plays Ticket to Ride every couple of months and enjoy the experience.

The card drafting is really where those comparisons end, but it’s such a big part of the game it was nearly impossible for me to separate the two. Fortunately, for Cophenhagen, there is plenty more going on to help it differentiate itself to give it its own, unique identity.

I found the tile-laying aspect of the game to be enjoyable. You often have to plan 2, 3 or 4 TILES ahead to ensure you maximize your space and your points. This might mean planning your card drafting many turns in advance. Since you’re at the mercy of the deck, you can’t always guarantee the right card appearing at the right time for you.

The ability tiles are also a neat addition to the game. They add just enough complexity to the game to provide a nice variety to your decisions. There are only 5 different tiles, so they were easy for anyone to grasp, but they were also beneficial to your game play, making them a key piece in your winning strategy. Similar to the rest of the game: easy to grasp, but yet filled with engaging decisions.

The game doesn’t overstay its welcome at all. Completing your facade always seems possible, yet never attainable. It’s the right mixture for replayability. This is the kind of gateway game that really makes it’s participants feel they’re doing something fresh and new. Heavier gamers might find it a little lite, but this is close to the perfect family-weight game. This could be that “compromise game” that family members can all eventually decide on at the end of the day.

I really appreciated Copenhagen’s smooth gameplay. I made a point to introduce this game to players who gravitate to lighter, gateway-style games and this was a big hit with everyone who played it. It’s accessible in so many ways: short setup, quick game time, easy to learn and simple mechanics. It’s not a brain burner, but that’s also a part of it’s charm. The game’s decisions are simple, but there are plenty of choices available (especially including the ability tiles) to keep things engaging and interesting. The game’s go by quick enough there might be time for a second or third play. This is a great pickup for someone looking for a family-style, gateway game with a charming theme and some interesting, yet accessible decisions.