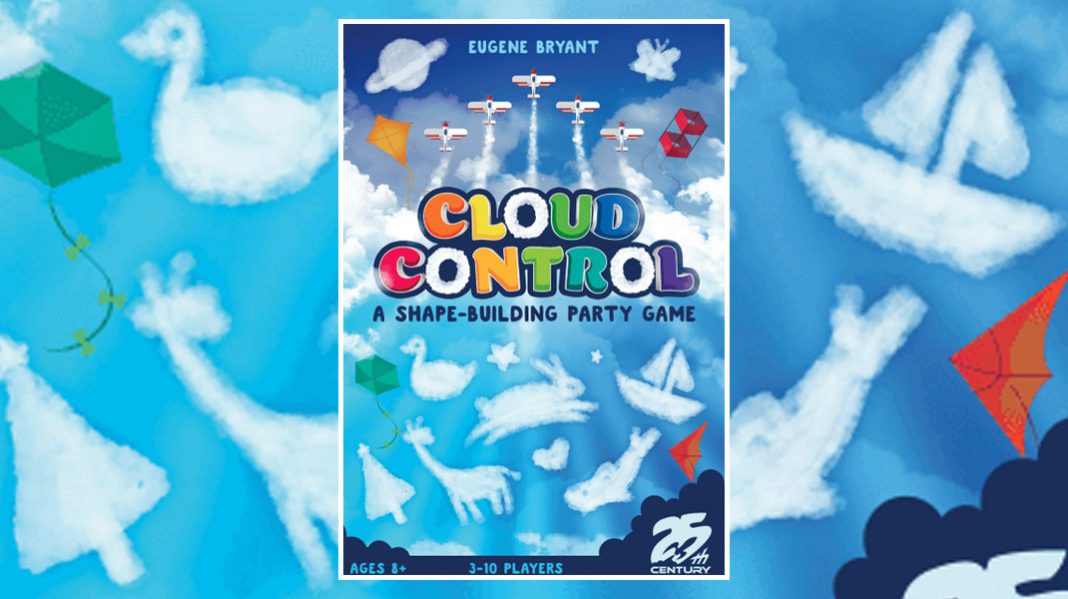 Cloud Control is a challenging party game where your greatest asset is your imagination. Players will work to express objects and ideas by cleverly combining cloud shapes within a limited amount of time.

To begin, you form a 4×4 grid featuring 16 individual cloud cards in stacks of four each. Each stack features a unique shape formed from a cloud that will serve as your palette for playing the game.

On a turn the active player draws a shape card that features 4 different words. The words may be an object, action or concept the player will be tasked with communicating in cloud language. The player is given 90 seconds to present as many of the words as possible by creatively arranging the cloud cards.

Players may choose as many cloud cards from the grid as necessary to communicate their words. They may orient the cards in any way possible such as moving them around to convey motion or animation or stacking or overlapping them. Players may also use hand gestures to emphasize a specific part of a card or to provide encouragement to the guessers such as “keep going” or “you’re on the right track.” The primary rub is the player is not allowed to speak, use sign language or create letters or numbers out of the shapes.

Other players spend this time shouting over one another, attempting to guess the answer. At the end of the 90 seconds, players add up the correct number of guesses. Points are awarded for each correctly guessed answer. The player who correctly guessed the answer also receives a point.

Once all players have had a turn, you begin the lightning round. In addition to the 4 words on each shape card, they also feature 1 lighting card word. A lighting word is chosen and all the players have 90 seconds to best communicate the word using the cloud shapes. Players then vote on the best interpretation and give the winner 5 points. Players are not allowed to vote for themselves.

Play continues until all players have had 2 turns creating shapes. Once the game ends, the player with the most points is declared king of the clouds.

Cloud Control is a pretty simple game with a limited array of components. The artwork is kid-friendly, but not overly silly. It’s inviting and works well for the party theme. The component quality is ok. The cloud and shape cards are pretty thin. The point tokens, shaped like kites are fun, but a little small and hard to grab.

I love the concept of Cloud Control. I was immediately drawn into the idea of forming shapes from clouds. As an artist and designer, this was right up my alley. I liked the idea of a timed round where you form as many different shapes as possible. I even like the idea of everyone having the opportunity to shout in unison attempting to guess the correct answer. Unfortunately, those concepts never really delivered for me.

My criticisms are largely based on my expectations. I wanted this to be a family-friendly game that works for kids of all ages. Where this fell short for me was in the object cards. Most of the objects, concepts and ideas were just too complicated or difficult to bring to life. Even when I felt I “nailed it”, the group rarely guesses the correct answer. I found myself jumping from word to word on the card hoping something would materialize. This isn’t the worst thing in the world. I love a good challenge, but I found this problem recurring much too often.

I also felt extremely limited on the selection of cloud shapes. There were so many things I wanted to do that weren’t possible with the selection available. I don’t really have a remedy for this nor would this seem like a criticism. The whole point of the game is to be creative with what you have available. Initially, the cloud cards looked capable of handling nearly anything I could throw at them. The problem was I often ended up with “not quite enough” of a certain shape or limited by what was available. The game provides a good assortment of generic shapes for building… it just never felt like I had the right cards. Again, this wouldn’t be an issue if it didn’t occur so often.

To be fair, the game was certainly more successful with some groups. People willing to embrace the creative challenge are going to have much more fun with this one. But even so, we often found the tasks way too challenging for a game we expected to be light and silly.

• The concept is great

• The setup is simple and gameplay is quick

• The game is easy to teach and jump into

I’m really hoping I’m in the minority on this one, but Cloud Control just didn’t pan out for me. I love the concept and creativity behind the game, but it just didn’t fit my expectations for a family-friendly party game. The most fun I had here was when we threw out the rulebook and took turns building words without the timer or points involved. It created a more casual experience and quite a few laughs. If the idea of Cloud Control intrigues you, I would encourage you to consider my experience, but also spend more time researching other people’s experiences. Maybe this one will be a better fit with you.