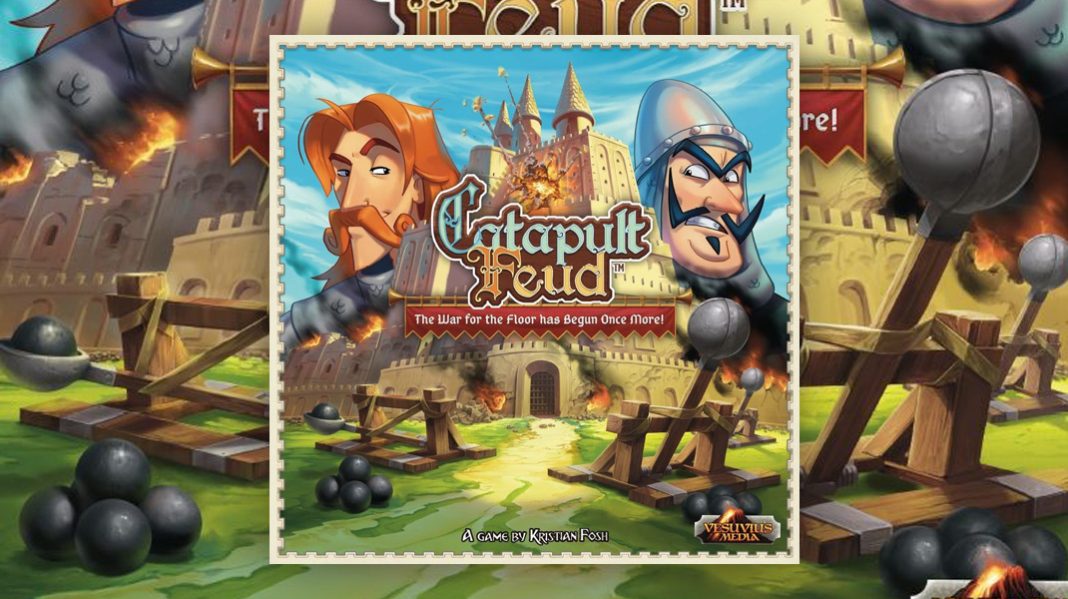 Build your castle, man the walls and prepare your catapult for battle in this whimsical, 2-player contest of dexterity and cunning.

Enough with the tactful, strategy games of tower defense, army area control and resource management… Sometimes you just need to take it directly to the mat and determine the most skilled medieval ballistics officer in hand-to-hand combat. In Catapult Feud, you get the opportunity to take on your rival armed with a rubber-pellet, projectile launcher (also known as a catapult) as you take turns firing shots seeking to inflict as much damage as humanly possible.

The game begins with a mound of plastic bricks begging to be sacked. Approximately 5 feet apart, players will attempt to construct the most impenetrable fortress this side of the Lego kingdom. The castles can take on any shape or form you can imagine as long as it fits on the provided player board. Once complete, you occupy your fort with 10 troops. There are some minor rules at play, but you essentially strategically place your force where they are most likely to survive the upcoming war.

Armed with a rubber band-powered catapult, players then take turns launching rubber boulders at one another attempting to dislodge bricks and fatally eliminate your opponents forces.

Sometimes the card is mightier than the rubber boulder. Prior to each turn, a player chooses an Action Card that provides access to a special ability such as rebuilding a portion of their castle, firing repeat shots or managing control of your opponents catapult for a turn amongst others.

After firing your shot, there is a clean up phase where damaged bricks or troops are removed from the field of battle. The player with the last troop standing is declared the winner.

Catapult Feud has a number of really amazing looking expansions including a volcano and a viking ship. I’m not even sure what they bring to the game, but they look super sweet! I had the opportunity to try out the Siege Expansion which brings additional building bricks, new troops and a ballista that fires boulders like a slingshot. The extra bricks actually add a lot of fun to the game allowing you to build bigger and better castles. The ballista is a little bit more of a challenge to fire than the catapult, but it definitely brings a high level of satisfaction to your battles.

I wouldn’t say this expansion is essential to your enjoyment of the game, but now that I have it… why wouldn’t I build a bigger castle and fire new weapons? Definitely a big thumbs up from this guy!

The artwork in Catapult Feud is somewhat cartoony and silly, but well done and fits the theme perfectly. But… this isn’t a game about artwork, this is a game about firing rubber rocks at chunks of plastic.

I’m not sure what my expectations were, but the components in Catapult Feud exceeded them. The plastic doesn’t feel cheap. The castle bricks stack really well and the troop characters sit nicely in their spots. I was never concerned with accidentally knocking over my castle or having a troop tip over.

The real star of the show is the catapult. It’s great fun to shoot! The catapult is powered by a rubber band and it’s the perfect trigger. I imagine the rubber band will wear over time, but it’s easy to replace. The rubber boulders are more bouncy ball than plastic rock. I hope that makes sense because I was very pleased with how these sat in the catapult and easily fired away.

➕ Fun for kids of all ages

➖ The actual action cards/card playing element of the game is fine, but it gets in the way of launching boulders… and that’s all I really want to do!

➖ Only 2 players limits the fun

Bouncing boulders can easily get lost under couches or behind chairs… bring a scout.

If the thought of launching a catapult at your opponent sounds like your idea of a good time… you’re probably going to like this. Catapult Feud is a dexterity game, but you’re not balancing blocks or trying to sort components against a timer… You’re lining up your shot, rearing back and letting it fly!

The best thing about this is the catapult itself… obviously. It’s really well made and tons of fun to fire.

If you’re looking for the next great dexterity GAME, Catapult Feud probably isn’t it. There isn’t a lot of game play here and there certainly isn’t a ton of strategy. I’ve never been a huge fan of dexterity games either. So it’s a complete shock that I absolutely LOVE Catapult Feud!

There is a high fun-factor in this game that really plays more like a wonderful toy than anything else. There is some strategy in how and when you activate your limited hand of card actions, but the game is 99% launching boulders at your opponent… and that’s really all it needs.

The production is really solid and definitely works for both younger kids and adults alike. I was worried that the catapults wouldn’t hold up, but I was pleasantly surprised by their quality and durability. Firing the rubber boulder is both smooth and much easier than I thought it would be. This completely opens up the game for younger kids to have success and find more enjoyment in their battles.

The actual boulder launching is just half the fun in this one. Building your castle out of bricks is similar to playing with Legos. It gives you a chance to be creative and I really enjoy the challenge of building the best fortified structure that will withstand a barrage of hits. Then you get to figure out how to position your soldiers which is just another fun piece of the puzzle. There really isn’t any negative when it comes to the different phases of the game.

It’s hard to say if this is something you’ll find yourself playing again and again. We’ve really enjoyed our dozen or so plays, but like any toy, I can see you moving onto the next thing eventually. I do think Catapult Feud has longer legs than most of the toys I received growing up. As long as you have a willing opponent, Catapult Feud is one that should keep making it back to the table.

Players looking for a great game probably aren’t going to find one here, but understanding Catapult Feud’s purpose and mission will help you understand if it’s for you. In the end, it’s chaotic, silly and a lot of fun. While I think it’s best for kids, this is definitely something the entire family can enjoy. I really wish I could play it with 4 players, but I imagine buying 2 sets will get you there. There are a number of really cool expansions, so there is plenty more fun to be had after you exhaust the base game. Overall, It’s quick to set up, plays in about 20 minutes and then you can do it again. I highly recommend Catapult Feud for its fun, unique experience.