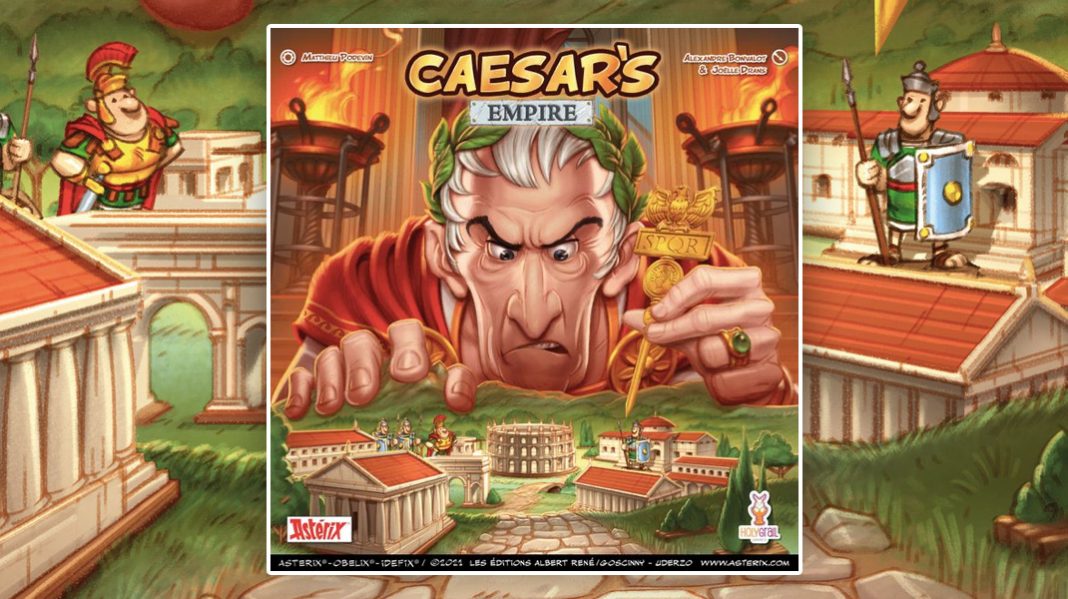 As part of an eclectic group of Romans citizens, Caesar has tasked you with one objective: travel the empire and ensure all roads lead back to Rome. In this family weight game of set collection and network building, players will be connecting the nation’s cities through an intricate network of roads. With each road built you earn points, even piggy-backing on your opponents construction. Build sets of resources as you connect new cities and draw their imports to the Eternal City. Outwit and outplay your opponents to earn the most points and earn Caesar’s favor.

Caesar’s Empire is a game full of simple actions, and deceptively deep strategy.

On your turn you have one action: construct a road that connects to Rome. This may mean connecting directly to Rome or building onto a pre-existing road.

As you play a road token, you earn points based on how many road tokens you have on that particular piece of road heading back to Rome. The twist is all other player tokens apart built from that same road also earn points.

Connecting to new cities will earn the player a resource which is randomly dispersed on the board as well as a regional city token. Each resource is part of a set collecting goal that earn points when you collect both unique and same-type resources. Each regional token is worth a certain value and scores the player the highest valued, collected token in that region at the end of the game.

Once the last city has been connected, the game ends and players add up their total points, set collection scores and any regional tokens. The player with the most points is the winner.

The artwork is apparently from a comic series called Asterix—which I am not familiar with. It has a bit of a twisted, Disney vibe that’s colorful and friendly enough. While I don’t think the artwork is bad, I have a feeling the style has turned off a few people who may have given this one a second look.

The board is ultra-huge, and each player has 25 plastic road tokens/figures (featuring workers building the road). The plastic figures are kinda cool, but overall, the production is just ok. There isn’t necessarily anything bad, but nothing that really stands out.

➕ Great for kids of all ages

➖ The game requires a decent amount of table space

➖ The overall production might not appeal to new players

Players looking for a gateway/family-weight game with simple mechanics and a decent amount of depth to their choices are going to appreciate this.

The best thing about this is the game’s choices. Knowing that connecting to a certain road may earn your opponents points forces you to consider the cost/reward. Additionally, you have to take into consideration any city bonus tokens you can earn that might sway your choice.

I appreciate a good gateway game with its typically slimmer rule set and quick gameplay. Caesar’s Empire not only meets the criteria, but it brings a nice depth to it you typically don’t see in these types of games.

You literally can do one thing on your turn. It really doesn’t get much easier than that. Playing your road token creates an almost tactical game where you’re attempting to outwit your opponents as you seek to maximize the return on your action. It’s easy to focus on your own roads, but getting in on your opponents actions can create big time residuals over the course of the entire game. Of course, hopping on board with your opponents roads will also create some apprehension for your opponents which is always fun.

While road building is your primary way to score, building sets and connecting new cities are an essential supplement. Sets score both deep and wide—earning you exponentially more points as you gain more of a specific resource as well as more different resources. This will play out differently each game since these resources are randomized to start.

The region tokens all feature a different number in that region. At the end of the game you’ll score the highest region token you have of that region. This definitely incentivizes playing in different areas of the map. This may mean cherry picking certain cities as roads expand, but the danger is sacrificing the big points you earn from growing your own longer roads.

I don’t think it’s the theme that turns people off, but I’ve noticed a little hesitancy when I attempt to introduce Caesar’s Empire to new players. The cartoony style might just not sit well with the players I’ve tried to bring in. It might also be how simple the rules are. Like a video game where you only mash a single button the entire game… it may be difficult to see how a single action can produce some neat in-game decisions.

This is a light game and that works well for families, but I know it’s not going to appeal to heavy gamers. I do think there is an interesting game here and I’m hoping more people are willing to give it a chance. It played well at all the player counts, but I really enjoyed it at 4 or 5. When there are more players invested, it creates more interesting situations and scoring opportunities. I recommend Caesar’s Empire and definitely think it will surprise some people.